Ladies and Gentlemen, the day is finally here!

I am absolutely chuffed to bits and over the moon to announce that The Bucket List is available now! So far, it's only up on Loose Id's website but there you can pick any format of your choosing for download. It will be available on Amazon later today.

I'm really excited to share this story with you all. You can check out the blurb and an excerpt below.

Thank you all once again for all your support and have a lovely day! 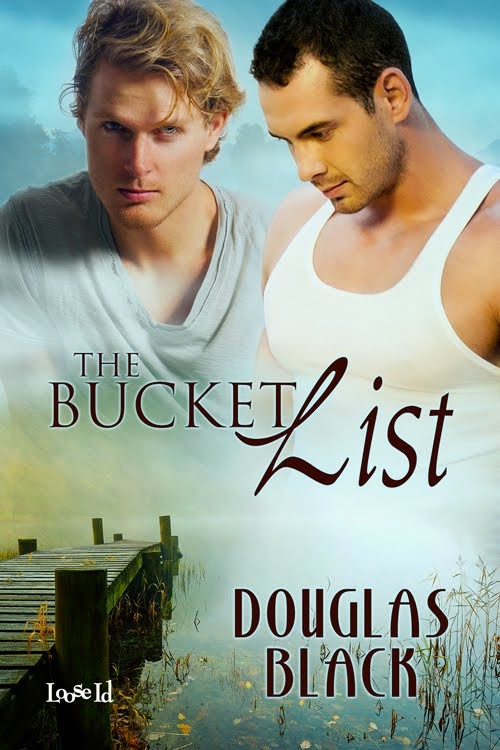 Blurb
When Kade Doherty gets dumped, he expects sympathy from his friends. Instead, he gets a bucket list. His friends want to help him enjoy life again, but Kade isn’t convinced a list of outlandish leisure pursuits will help much with that. To keep the peace he goes along with the plan and in the process, he meets Blake.

Blake’s Australian accent and surfer-boy looks are the stuff of sexual fantasies and Kade surprises everyone – including himself – when he wastes no time making a move.

Kade goes with Blake into the Scottish highlands, but just as he is beginning to get used to life with his very own Mr. Australia, reality comes knocking. Kade’s newfound happiness falls apart when his abusive ex demands they meet. Blake senses something is wrong and he wants to help, but Kade knows he can’t confide in Blake.

After all, Kade hasn’t exactly been honest. He might feel like a different man when he’s with Blake, but Kade knows he’s still just an accountant from Glasgow with slight obsessive compulsions and a bucket list that someone else wrote. He knows Blake won’t hang around, let alone help, when he finds out the truth.

Excerpt
Kade looked up at the unfamiliar facade of the building in front of him. If he hadn’t just checked his location for the third time, using both the sat-nav on his phone and the one in his car, he would have sworn he must have taken a wrong turn when he reached the unfamiliar streets of Glasgow’s East End.

Unlike the supermarket he normally frequented, this one had no branding or signage to speak of. There were no garish colors and definitely no cheesy logos. If it had an official name, the owners clearly didn’t think it was worth sharing with their customers.

The building looked like a windowless warehouse, and the car park, devoid of neatly painted grid lines and pointless shrubbery, was just a gravel-covered, pothole-ridden piece of ground hemmed in by a giant metal fence. If it hadn’t been for the steady stream of people coming and going through the single-door entrance, Kade wouldn’t have known if the shop was open or closed.

He sighed and leaned against the bonnet of his car. All he really wanted to do was get back behind the wheel and drive back to what was familiar. The temptation was almost overwhelming. It wasn’t like he hadn’t had enough changes and uncertainties to deal with recently without dragging the weekly shopping into the mix. He pulled out his phone and scrolled down until he found Ian’s number. Ian answered on the second ring.

“I’m standing outside an Asian supermarket. Are you happy now?”

“That depends,” Ian said. “Are you actually going to go inside, or are you just planning on standing in the car park, biting your bottom lip and looking at your feet?”

Kade looked up from his boots and removed the phone from his ear momentarily so he could stare at it instead. He heard Ian’s laughter through the handset.

“Fuck you very much,” Kade said under his breath when he put the phone back to his ear.

“And you. I’ll see you tonight. You know, I’m impressed. Doing two things outside of your comfort zone in one day? Hell, the council must be pumping chemicals into the water again.”

“Yeah, yeah. Very funny.” Ian was still laughing when Kade rang off and slipped his phone back into his pocket.

Ian’s jokes didn’t feel very funny to Kade at the moment, and his behavior had nothing to do with too much fluoride in the city’s water supply, as Ian well knew. Instead, it had everything to do with that stupid bloody list.

The bucket list. His bucket list. Only it wasn’t really his at all, because Kade hadn’t had any say in whether or not he wanted a bucket list, let alone what he wanted to put on it. Ian and his boyfriend, Paul, had drawn it up the morning after Kade had shown up on Ian’s doorstep, shouting and ranting and crying because Niall had left.

The Bucket List is available now. Get your copy at Loose Id's website!
Posted by Unknown at 02:14