You may remember my 'Where Writers Write' series of blogposts, in which myself and other authors take you inside the studies and offices and coffee shops where we do our writing (not to mention our fair share of staring off into space while drinking copious quantities of tea).

Well, today the lovely Rachell Nichole is here to show us where she makes that magic happen. Take it away, Rachell!

Thanks so much for having me stop by. When you first told me about your Where Writers Write series of blog posts, I was super excited because I have just finished setting up my brand new office, which along with being a giant logistical pain in my ass, was also a lot of fun!


For starters, this is the doorway we had to wrestle my desk through last month: 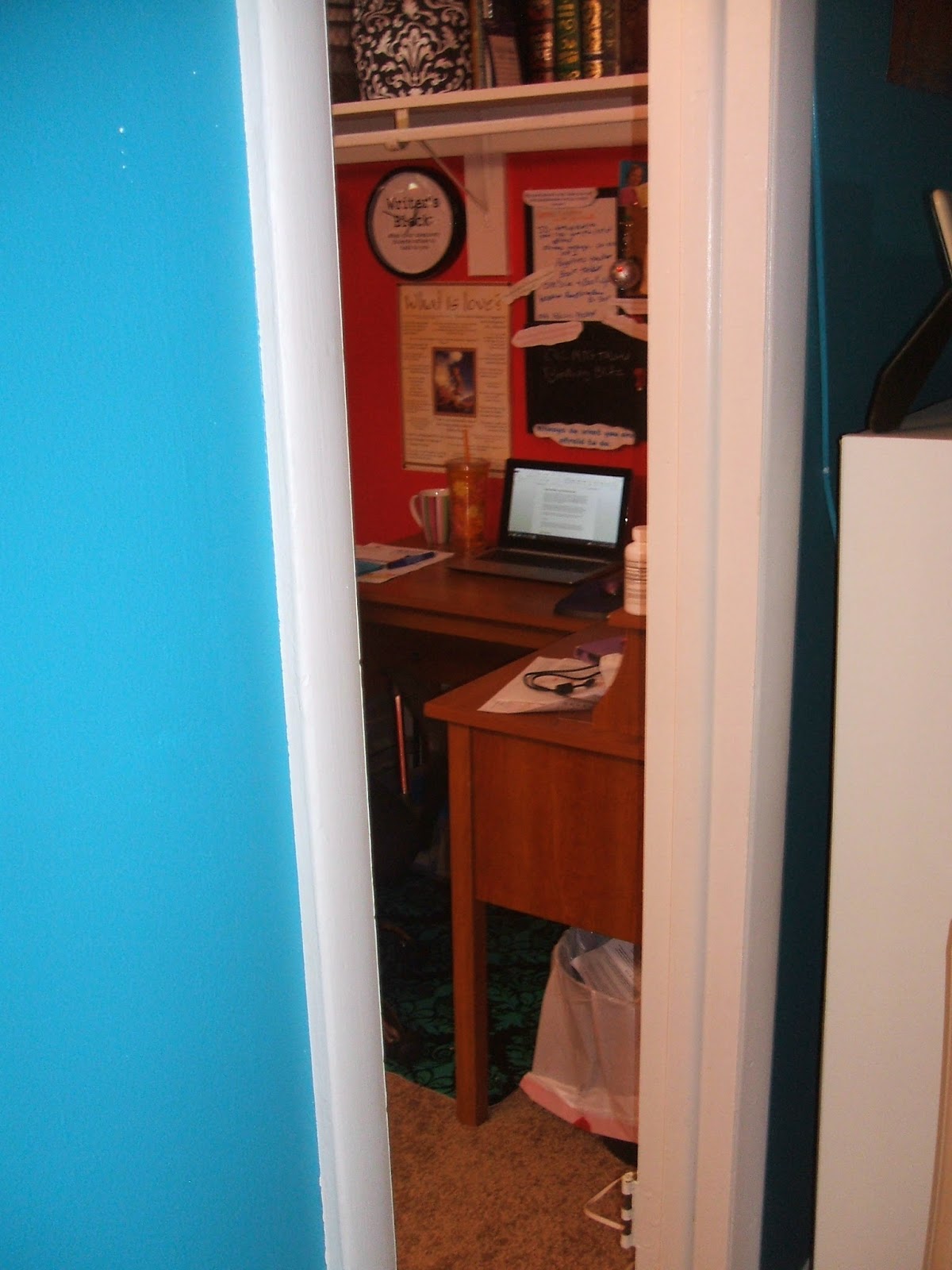 Oh, yeah, that was FAN-FUCKING-TASTIC, let me tell ya!

So here’s a shot of the finished product: my shiny new office! 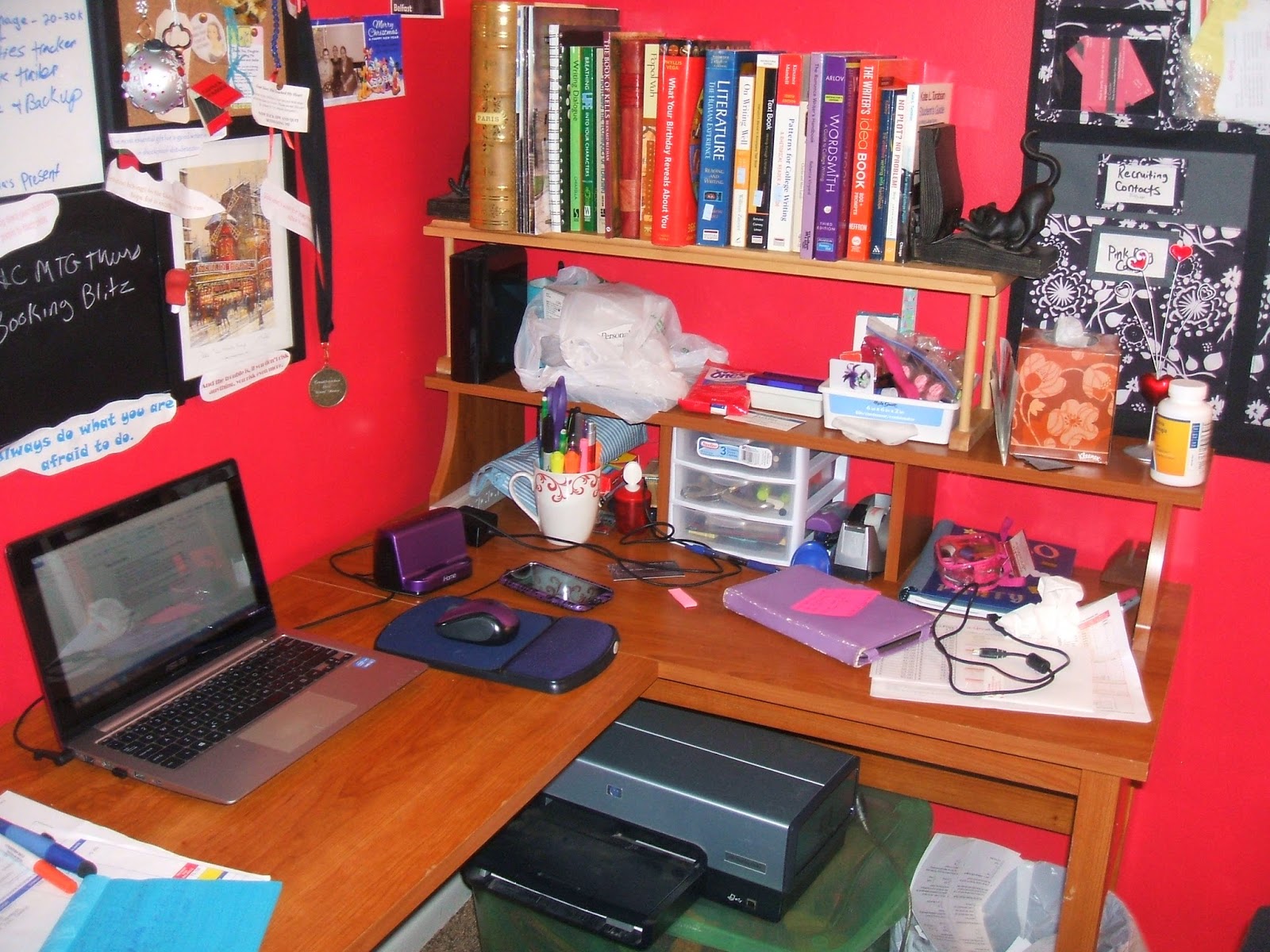 Now this might look like a small space for most people, but since I’m rather small myself at 5’2” this is like my own personal little hidey hole and I fucking love it!

On the left above my laptop (an ever-present fixture on my desk) you’ll see my multi-purpose board. In addition to being your resident guru for all things naughty, I also do a lot of other stuff. I teach, I run my own side business through a direct sales company, and I’m an avid traveler. So the board right above my desk is chock full of all those pieces of my life, staring me straight in the face every time I sit down at the desk to work. It’s my to-do lists, my writing quotes and inspirations, my accolades from previous writing accomplishments, and cute little sayings like, “Being a bitch is part of my charm.” And there’s also a print of the Moulin Rouge circa 1900 that I got in Paris a few years back in the photo frame. On the left of that, which you can’t really see in the photo is a poster of love quotes, an important thing to remember for a romance author, and my Writer’s Block: When your imaginary friends refuse to talk to you clock.

This is where the magic happens folks… plus, it’s red, which is just too damned cool to speak of, and it has everything I need in an office. ☺ I recently moved, and this is the first time that I’ve had a fully-designated office space that was all mine. Even though the room it’s in is multipurpose, it’s all my multiple purposes, and let me tell you, it’s like nirvana up in this bitch!

Now I’d like to say this is where I wrote my latest book, To Sir, but that would unfortunately be a lie. That was written back at the old place in the old office. Same desk, same computer, but a very different kind of space that was noisy as hell and crazy. But this is where I did the bulk of the edits for my newest release, so I guess that counts for something, right?

I'd say that definitely counts Rachell, thanks for showing us your shiny new office. It looks fantastic! Certainly makes mine look dull by comparison.

Below you can find out more about To Sir, the book Rachell didn't write in that office! ;-)

Here’s some more on Chase & Liz.

Chase and his club are in the crosshairs of a local senator and the bank, and he fears he might lose everything. So when Liz grudgingly agrees to be his, if only for a few weeks, he’s elated. But what kind of long-term relationship can a broke, out of work, homeless Dom offer to a burgeoning submissive who won't submit outside of the bedroom?

And here’s an excerpt:

“You’ve got to be fucking kidding me. I don’t have time for this.” Chase glared at Dusty across his desk. He knew he shouldn’t be taking out his frustrations on his partner. He was a class-A asshole, but he couldn’t seem to help himself. Each day grew more difficult. No sub, the club in some serious shit, and now this?

Chase rubbed his temples, closing his eyes for a moment to block out the sight of his dark office that overlooked his club. The club they’d worked so hard to build and that they were in real danger of losing.

“It’ll be good for business. Every new title on the shelves that has a damned thing to do with shades of any color helps change the minds of people like that jackass senator.”

Opening his eyes, Chase shook his head. Ever the optimist, his Dusty. “People like him will never change their minds. No matter how many books are on the shelves, or movies in the theaters, or clubs like ours around the world. Some people will never get it. And whatever. We’re not asking them to join in if they don’t want to, but they have to stop trying to prevent us from doing it.”

Dusty flopped down into one of the chairs facing Chase’s desk. The leather creaked under his ass. Behind him, the barely lit club stared back at Chase through the one-way glass window of his office. Mocking him.

“She sounded cute on the phone,” Dusty said, drawing Chase’s morose thoughts back to what he needed to focus on. At Chase’s frown, Dusty shrugged. “What? She did. And maybe somewhat shy as well. Come on, it’ll be good for you. Help take your mind off things.”

They were meeting with their lawyer in the morning to go over a way to stop the injunction. The damned judge, no doubt in the senator’s pocket, had signed off on the piece of paper that said the K Club had to close its doors. That had been four days ago. The world was closing in around him, and it was getting harder to breathe.

He had enough to deal with, and he didn’t need some author in here poking around, asking stupid questions, and generally treating the K Club as a sideshow she could laugh at. But he was already faltering in the wake of Dusty’s big blue puppy-dog eyes. The guy was like his younger brother and knew that look would get him his way.

“Like super cute. And very hesitant. Like she wasn’t quite sure she wanted to visit us at all.”

Dusty’s blue eyes sparkled as he clapped his hands. “Great. She’ll be here in an hour.”

“You shithead.” Of course Dusty had already invited her to come in for a personal tour.

Dusty stood and left Chase’s office without another word, closing the door behind him. A moment later, Chase caught sight of him back downstairs by the bar.

An hour later, Chase was still buried under paperwork, scouring the consent contracts, the original ordinance he’d received from the city when they first opened five years ago, and some more paperwork the lawyer had faxed over yesterday. A loud knock sounded from downstairs, but he didn’t get up. Dusty was still down on the main floor, and he’d been taking care of whoever came knocking for the past couple days. The man was a godsend. How had Chase ever gotten on before without Dusty to look after him?

He turned his attention back to his work. No doubt it was someone else coming to inquire about the club, when they’d be back open. Their members had been so lost when he’d announced the closing of the club, even though he’d assured everyone it would be temporary. And he was damned sure going to make good on that promise. He would not fail.
He glanced through the window again when the bright light from the main door shone into his office.

Shadowed in the doorway was a tall brunette. Hair pulled severely into a long ponytail, dark, elegantly slanted eyes bordered in charcoal, a tight black top with lace over breasts and arms, combined with the long, leather-clad legs told Chase this was a Domme. Her beautiful Asian face was not one he recognized. She must be new in town, or perhaps visiting and wanting to check out the scene before hours. He and Dusty would usually extend an invitation to a visiting Domme, but since the club was under lock and key, that wouldn’t be happening. Apparently the protesters and CLOSED signs outside meant nothing to her. And instead of sending her on her way, Dusty smiled, shook her hand, and ushered her in out of the stifling Nevada heat.

Chase half rose from his desk to peek through the tinted windows of his office into the club beyond. His groin gave a jolt as he caught sight of their visitor’s swaying hips in the skintight leather. That gave him another what the hell moment. It wasn’t like him to be attracted to other Dominants. Going three weeks with no outlet had started to take its toll.

Dusty started leading the woman around the club, showing her the bar area, then the open dance floor and the bank of small seating areas along the one wall. Her face remained impassive, and Chase shook his head. That author was late for their meeting, and he couldn’t help but be glad he was now free to go and greet their visitor. He strode from his office and down the private back stairwell to meet them in the main area of the club.

“And this is where we have our shows,” Dusty was saying, leading her up on the stage.

Chase stayed in the shadow of the staircase, watching. The delicate bone structure of this woman was showcased beautifully by her dark coal-rimmed eyes, deep red lipstick, and a light blush that appeared completely natural. Her gaze was hot, stubborn, and he could almost see a flicker of flame from within. It instantly ignited an answering burn inside him, and he gulped in a few cool breaths. What the fuck was his problem today?

She looked up, and their gazes locked. An image flashed through his head. Her, bound to the top of the canopied bed in his room, a white mask covering her eyes, head thrown back in ecstasy as he tortured her senses. He blinked reality back into focus, determined to shake this strange attraction. He knew from experience, some Tops could never bottom. And this woman obviously didn’t have a submissive bone in her entire lithe little body.

For more Chase & Liz: http://www.loose-id.com/to-sir.html and you can grab your copy at all good Ebook retailers including;

You can also watch a trailer of the book (very fancy!) on Youtube! 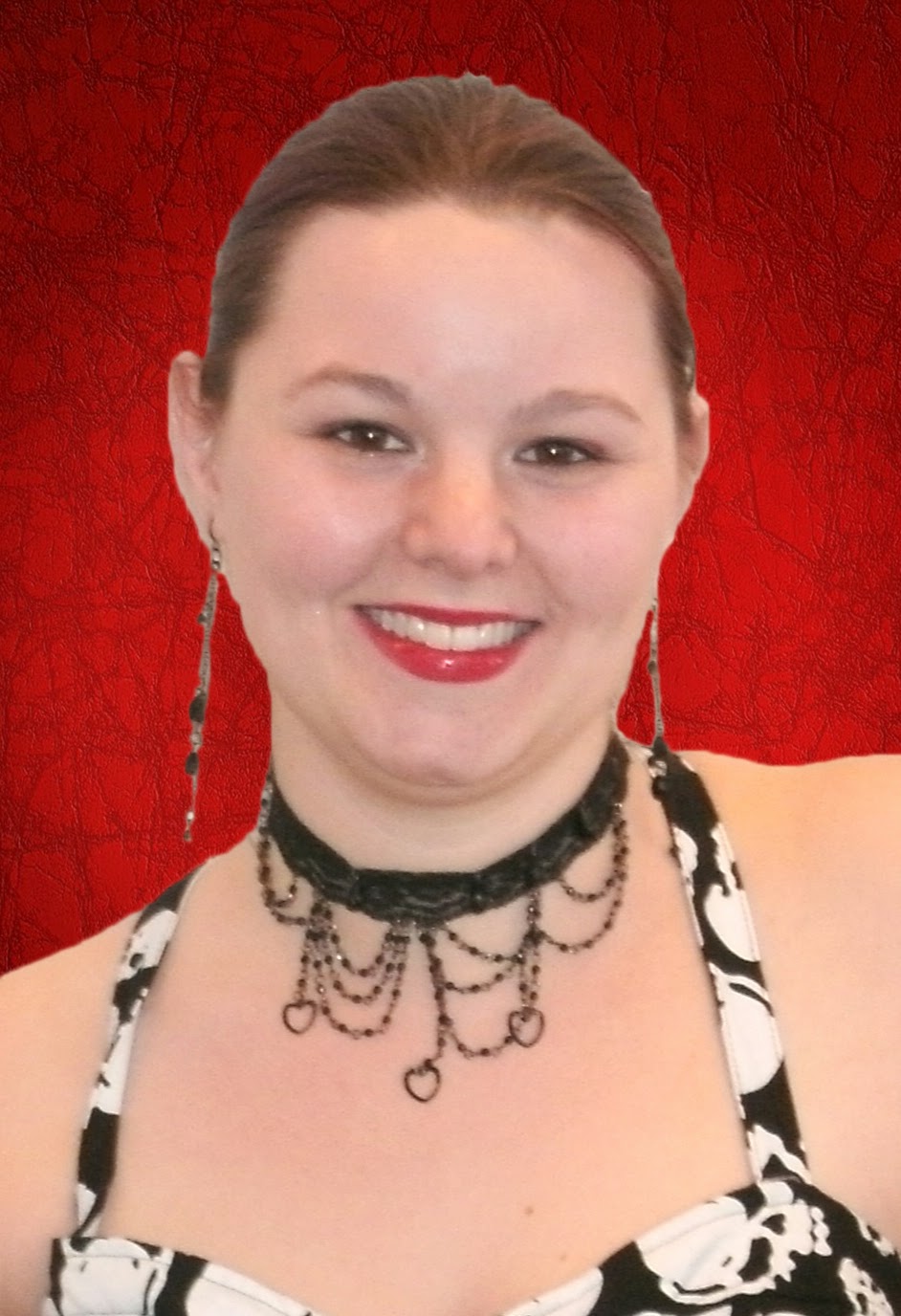 Douglas, thanks so much for having me stop by today! I’ve had a blast talking about my writing space and my lovely new book! Readers, thanks for stopping by. Please feel free to leave questions in the comments section and I’ll stop back in to answer them. ☺

It's been a pleasure Rachell. Stop by any time!