Hello my lovelies, I hope you are all well. I've been rather neglecting you all these past two weeks and for that I apologise. I was in Spain on a family holiday and the villa we were staying in didn't have an internet connection. I know, I was horrified too. There were tears before bedtime that first night, I tell you.

If I wanted to send an email or check in with you all I had to pop down to the local bar where an hour of wifi came at the price of a vodka and tonic. Or two. And frankly after the first week, this new means of paying to be connected with the outside world began to feel like it might not be great for my health!

However, I am now back in bonnie Scotland where the grass is green (because it's tipping it down in August and there was frost last night) and that means that I have to wear jumpers and socks again AND it means that I can share the following information with you... 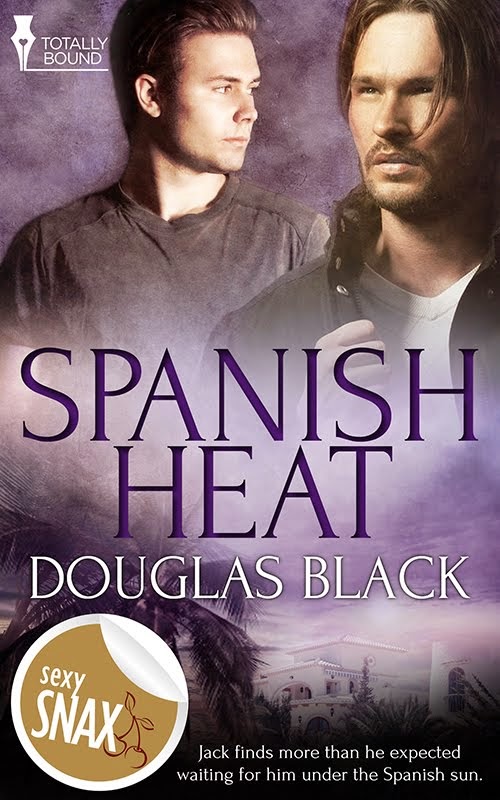 Spanish Heat is available now! I'm very excited to see Spanish Heat back on the market. Some of you may remember this as Business or Pleasure which was released by Silver Publishing back in April 2013. After the problems at Silver the rights were returned to me and my story found a new home with Totally Bound Publishing. I'm loving the new cover and I'm so glad I can share this story with you all again. If you didn't get around to reading it the first time, you can find the blurb and an excerpt below.

Blurb
Jack is looking for a new job and a fresh start, but he finds more than he expected waiting for him under the Spanish sun.

When Jack Campbell is unceremoniously dumped in favour of his high school best friend, he decides he needs a fresh start. He sees an advertisement in The Times. Clark Thomas is looking for a house sitter for his villa in Marbella. In a slightly inebriated state, Jack applies seeing this as the perfect chance to get away from his troubles at home in Glasgow, but when he lands in Spain, he finds a lot more than a just job opportunity waiting for him.

Clark has one weekend to show Jack the ropes before he leaves Spain and the memories of his own recent break-up behind for the next nine months. However, there’s just something about Jack. Instead of explaining the finer points of Jack’s contract, Clark finds himself introducing the young Glaswegian to some of his favourite Andalusian haunts, and he’s spending more time doing so than is necessary.


There must be something in the Spanish heat. All too soon Clark and Jack find themselves struggling to maintain the boundaries of their employer-employee relationship. Jack is behaving in ways he never has before, but knowing that what he’s doing is probably wrong doesn’t stop it from feeling right, and it might cause Jack a bigger problem when Monday morning comes around and it’s time for Clark to leave.


Excerpt
Clark swung himself to his feet and pulled his T-shirt over his head, dropping it onto the tiled floor. He faced Jack, who fought to keep his eyes from exploring Clark’s tanned, pleasantly hairy chest and abs. “Fancy joining me?”

The denim shorts dropped, pulling Jack’s eyes back south to a pair of baggy, purple board shorts. Clark was in the pool before Jack had time to work out what he was talking about.

“Come on. I keep the water nice and cool. There are spare shorts behind the bar.” Clark shouted, gesturing to the well-stocked bar at the edge of the large, barbecue kitchen at the end of the pool.

Jack watched the water rippling as Clark moved expertly through the pool. Slowly he stripped off his shirt and went behind the bar where he fumbled with a pair of green Hawaiian shorts before sliding off his jeans.

The high counter of the bar protected his modesty and he told himself the feeling of eyes on his skin was just paranoia. Suitably attired, he returned to the pool, tossed his clothes beside his beer and dropped into the water, grateful to be cool again.

“I’m sure you’ll really like it here, Jack. It’s a brilliant place.”

Jack nodded but kept his distance. Going swimming with his new employer half an hour after meeting him felt a little inappropriate, even by his newly lowered standards of behavior.

“Have you been to Spain before?” Clark rolled onto his back.

Jack struggled not to stare at Clark’s toned, tanned chest. “Family holidays when I was much younger. I’ve never been to this part, though.”

“Do you know anyone in this part of the country?”

Jack shook his head. “I wasn’t really thinking about whether or not I would know anyone when I sent the email. Getting away from it all was sort of the point.”

Clark fell silent, and Jack wondered if he had said too much. When Clark started to swim to the edge of the pool, Jack tried to work out what he could possibly have said. He watched Clark plant two strong arms on the side of the tiles and lift himself from the water, half a meter from the metal pool steps.

Water rushed from Clark’s hair and shoulders making his muscles glisten in the sunshine. His shorts, wet and heavy, were pulled down as Clark propelled himself from the pool.

Jack caught a glimpse of a tan line and dimpled buttocks and tried to create a bland expression on his face as Clark turned to him.

“Do you fancy grabbing something to eat tonight, then? I could show you around a little—help you settle in. I don’t exactly have much planned for my last weekend.”

“That sounds good,” he said a little warily.

You can get your hands on a copy of Spanish Heat at all good Ebook retailers now!