A warm welcome back to R.M.Sotera who was kind enough to pop by on Tuesday and show us where she does some of her writing. Today she's back to share an excerpt from Wild West Weekend with us. This is the first book in the Double D Series. Take it away R.M!

I continue to have the honor and pleasure of co-writing a series with the talented C.R. Moss.  The Double D Series wasn’t our first attempt at writing together.  We first tried the co-authoring arena with two separately written books that we connected through the storytelling.  What I mean by this is we incorporated our characters into each others’ books in certain chapters.  Dirty Dancer and Dirty Little Demons was our trial at working together.  We loved it and wanted to continue the co-authoring relationship.  Our Double D Series came about next.  Our First book – Wild West Weekend – is about two best friends that spend a weekend on a working ranch in Las Vegas, Nevada -  where they attend a bachelorette party.  When you throw together a Broadway actress, an ex-dominatrix and two strong-willed, hard-headed sexy cowboys all hell breaks loose.  It’s a crazy ride through the Wild West. 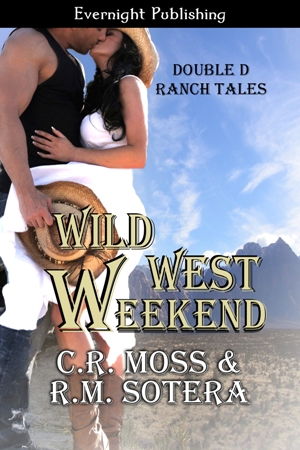 Two people scared to love again. Two others hesitant about commitment. A weekend in Nevada will change all that.
Bristol Ashcombe is swearing off men and taking a vacation with her friend, Cassie. Damon Dougan is packed and ready to leave the ranch for a trip, that is, until a long-legged, sexy woman steps out of a vehicle and he decides to stay. Will one sex-filled weekend be enough for either of them?
Cassie Harding travels to the Double D ranch to meet Bristol and looks forward to seeing her old friend, Dakota. Dak’s excited when Cassie, his former sweetheart, returns. Cassie and Dakota, though they’re heating up ‘the sheets’ in and out of the bedroom, have fears about commitment after years of being single. Will they find it’s better to dance together than apart?
Be Warned: light bdsm, sex toys.

Bristol reached for his hand, tucked it comfortably between hers. “I want to go back to the love shack and fuck. I mean sex. No, what I mean is have lots of sex. With you and me.” She really needed to stop drinking as well as speaking. Soon.

A sly grin slid across his face. His eyes sparkled with lust. “With you I like make love. It sounds better for you and me.” He leaned in close to her, his breath warmed her cheek. “Tell me again how you would like to take me back to the cave and have sex with me.”

Was it the booze that had her inhibitions running wild and free, had her saying things she couldn’t have ever imagined coming from her mouth? Plain and simple, she wanted the fuck part, not just the making love that consisted of gentle and boring. “I want you to fuck me, Damon. You’ve been kind and gentle, but I want more with you, I want so much more. I want the animal in you to release the animal that I know is somewhere inside me waiting for the right man to set it free. And it’s not the booze talking it’s me, the real me.”

His lips touched her hand. “The booze may have pushed you a bit, but I do believe the vixen in you is ready to shine. I’m going to set that animal inside you free, darlin’. I promise.”

During the drive, then short walk back to the cave, Damon held Bristol’s hand. They’d made it back in forty-five minutes with their scattered stops to kiss, grope each other, and Damon removing most of her clothes.

They came to a halt at the ladder.

“Stop.” Damon put his hands on her hips, and caged her between him and the ladder. His lips covered hers as his hands slid the last article of clothing she wore, her underwear, down her legs. Once the panties hit the ground, she stepped out of them, and he lifted her to sit on the third step of the ladder, spreading her legs with his knee.

A primal passion filled Bristol to the point she felt like she was drowning. She put her arms around his neck and placed her lips against his.

His finger found its way into her pussy. Slowly, he slid the finger in and out. The cicadas took up their nightly song as the desert night breeze brought her nipples to attention. He inserted a second finger inside her and moved his lips to her neck, sucking the area below her earlobe.

A nice hickey would probably await her in the morning. Hopefully several. “Take me, Damon,” she ordered in a husky voice, unbuttoning his shirt. “Take me out here in nature.”

He shifted, moved out of the tub and knelt next to it. Holding up a washcloth, he instructed her to sit back.

She reclined again, closed her eyes. Slow and steady, the material caressed her shoulders, her neck, skimmed down to her chest. With gentle movements, he washed her body, always making sure, much to her chagrin, only cloth touched her skin. The fabric, under his strong competent hand, danced along her chest, down and around her legs, graced her crotch. Her nipples hardened with desire, peaked in the water. She arched her back.

A low, seductive chuckle rolled from him. “Impatient, my dear?”

Through half-open eyelids, she gazed at him. She wanted him with an intensity that shocked her. The desire wasn’t just for the sex either. It was for the connection that would occur, the joining of their emotions, the merging of their souls while they loved and created a beautiful bond between them. “Why, yes, I am.” Cassie reached out and ran the palm of her hand down the mid-line of his chest.

Dak grasped her hand, kissed the backs of her fingers. “What about your hair?”

“Already washed today.” She slid her gaze down to his sexy lips. A tiny sigh escaped her. Before she could take her next breath, he clasped the back of her head, claimed her lips with his own.

His free hand slipped into the water and fondled her breast as his lips moved sensuously upon hers. She reached up, took his head in her hands and threaded her fingers in his silky hair. Their tongues warred and sparred in ardent foreplay. She wished the tub wasn’t between them.

She pulled away, observed his darkened and hooded gaze fill with desire. As they stared into each other’s eyes, he massaged the back of her head while the other hand moved to the junction between her thighs. He stroked and tweaked her clit, slid a finger within her slit. Her mind whirred with passion. She moaned and writhed as he brought her to the edge of ecstasy and over the cliff. Her body tensed, vibrated with release.

Her breath caught in her throat. No man had ever done what he had. None had ever watched her with such rapture, looked at her with such devotion, while she came. He cupped her face, pecked her forehead with a kiss.


“God, Catherine, you’re beautiful. I want to make love to you, cherish you, treat you like a goddess. I want this experience to be different than what you’re used to, no domination or submission or kinky role playing. Just two people loving each other. Can you handle that?”

You can grab your copy of Wild West Weekend from the following websites: 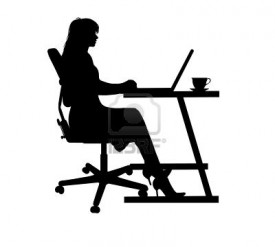 R.M. Sotera is a romance vixen stuck in the body of a prim and proper woman.  A transplant to Las Vegas, by day she is a wife, mom, taxi driver, counselor, and psychologist to her wild and, at times, crazy friends.  But when the family goes to bed and the house is dark, she seeks refuge in her office where her deepest desires take hold.
And…ultimately a story is born.
~~Read a story by R.M. Sotera ~

~~Where Happily Ever After Is Just The Beginning~~
www.rmsotera.com 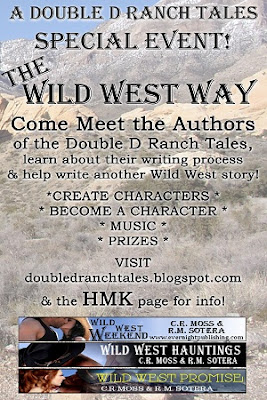